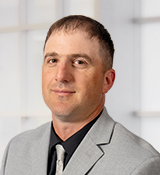 Tyler was born and raised in State Center, IA. He earned his BS degree in Agricultural Business and his MS degree in Agricultural Education from Iowa State University. Tyler began his professional career as an instructor and head rodeo coach at Iowa Central Community College in Fort Dodge, IA. While teaching at Iowa State University in 2007 he became more interested in price risk management for farmers and ranchers while teaching AGEDS 450, where the class was an actual farm that students managed. In 2009 he and his family moved to his wife’s hometown of Almont, ND where he became the agricultural economics instructor as well as the Farm and Ranch Management degree advisor at Bismarck State College in Bismarck, ND.

While teaching at BSC Tyler focused his teaching efforts on risk management for producers, and worked closely with different banking organizations in conducting trainings for their clients in risk management strategies. In 2019 Tyler began working as an independent contractor with Kluis Commodity Advisors. In July of 2020, Tyler and Kluis Commodity Advisors opened their branch office in his new hometown of Almont, ND. As a Commodity Broker he will be helping farmers and ranchers develop and put into action their marketing plans.

Tyler has been involved in rodeo since an early age. He has competed in steer wrestling, tie-down roping and team roping since high school. He competed in college and continues to rodeo professionally. While no longer coaching at the collegiate level, he has found time to continue to help young steer wrestlers get started and has helped mentor two College National Finals Rodeo champion steer wrestlers.

He serves on the local New Salem – Almont school board, is a member of the Almont Commercial Club and has served as president of the United Lutheran Church of Almont church council. Tyler met his wife Jackie while he was coaching at Iowa Central and she at Dickinson State University. They have one beautiful daughter, Sidney.